In my post “I, Wonder Craver” I talk about how I asked the universe to give me a sign as to which name to choose for this website and how it actually answered me. At least I think it did. You can check it out here.

Asking for signs from the universe is incredibly subjective though, isn’t it? What you feel is a sign could be completely meaningless to someone else or you could read it completely wrong.

It’s an art. In requesting signs and in reading them. It’s a supposed feedback loop between you and something other than you. Something bigger. Call it what you want…God/the quantum field/the universe, it doesn’t matter. My go to name for it though is “universe”. And maybe it isn’t this field that even does the responding. Maybe it’s angels or ghosts or aliens or some other consciousness I have no idea about.

There are the signs I get that I ask for that are pretty straight forward and I love the answer I get. Like how I ended up choosing Wonder Craver as a name.

Other times I get an answer to a question that I don’t like so I’ll ask again just in case I get another answer. Like maybe I didn’t read the first answer right. I’ve been known to go for the best answer out of three. I know this is ridiculous but it’s me being honest.

What if I misinterpret a sign? Like a month or so ago I was wondering if I should stay in a particular situation or not and I saw a sign that said “Leavitt”…Leave it. Ouch. I didn’t like that answer and was quite upset about it actually. But when I spoke to a shaman friend of mine she said  maybe it was a message for me to leave the thought I was thinking. Could be.

There are a lot of maybe’s in this type of thing. And a requisite dose of trust in yourself that you’ll do the right thing regardless.

I could out and out miss and sign which is disconcerting. But I guess I don’t know what I don’t know.

Then there’s the classic that’s an actual sign saying “if you’re looking for a sign then this is it”. I love this one.

Added to the mix is the notion that your thoughts create your reality so if you’re thinking about something it’s going to show up. It isn’t necessarily a sign, it’s a byproduct of you thinking about it and putting it into the quantum field.

So commences a trip down the rabbit hole.

I still love proactively asking for signs but then there’s also a magic in the signs you get that you didn’t solicit. In the synchronicities (aka meaningful coincidences) life throws your way.

One of the coolest signs I’ve gotten from the universe lately happened last February. I had gone to Bowen Island to recuperate from an exhausting job. I work in film and I had just come off the hardest job of my life. I really wanted to get clear on my life and what I was doing with it. Get a re-direct and get inspired again.  I decided to do a bit of a walking meditation and really got down to the nitty gritties of my hopes and desires. Really dreaming big. I was walking along the ocean under these beautiful trees and saw an eagle flying above me and I followed it for a bit. When it stopped and sat in one tree in particular I stopped too. I then saw this on the ground… 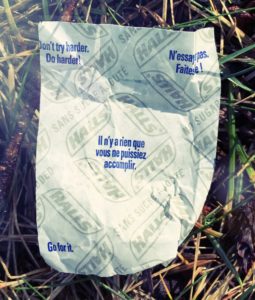 For those of you that don’t speak French, the middle bit means “There is nothing you can’t accomplish”. Now those were some pretty darn clear message albeit on a Halls lozenge wrapper but powerful nonetheless. It made me feel like I had support behind me, that I was on the right track. You don’t get a better sign that this!!!

Tips/No Tips To Improve Your Interpretation of Signs

Despite my best efforts I haven’t really discovered any tricks of the trade to improve this feedback loop between me and the universe. It’s such an ever changing, personal process.

But one thing that stood out after I got my message about Wonder Craver was this…I didn’t give up and still expected an answer. At the expense of sounding new-agey and self-helpy I sustained positive expectation which can’t always be said for me in this process. I don’t necessarily believe I’ll get an answer and I certainly want to avoid disappointment. Perhaps this is diluting my participation in this process and is something I need to work on. Because when I’m positive or when I’m not expecting anything at all like on Bowen the messages come. It’s like I have to get out of the way or something.

I also realize that me asking for signs is a very one sided act. That it’s what I get from something. But I’ve recently been conscious of what do I give in this dynamic or rather what I don’t give. But what does one give in this type of situation? All I could come up with is that I can give thanks. Gratitude for getting a response in the first place. For knowing to ask. To being able to access this kind of knowing. This perhaps isn’t as much of a tip as it is a recommended practice. It just feels good and is a way to honor the process and whatever it is I’m interacting with.

Do you have any tips or practice as to how you go about getting clear and powerful responses from the universe? What personal stories have blown you away like my Halls wrapper story?

Please share your responses in the comments section below. I’d love to hear your experiences!

For most of my life I have always struggled with m

I posted this quote on Pinterest a few years ago a

I came across the quote on Findhorn’s Facebook p

Becoming one with the trees and keeping a low prof

Dropping some Socrates on you 🙌 #wonder #wonde

I just discovered Thomas Berry and can’t wait to

© 2021 All Things Aliholly. All Rights Reserved. Designed & Developed by SoloPine.com